Located in the Chobe Forest Reserve in Western Botswana, the private Ngoma Safari Lodge is located on the edge of a plateau, offering endless views over the seasonal Chobe flood plains.

What Ngoma Safari Lodge will offer to you:

Located in the Chobe Forest Reserve in Western Botswana, the private Ngoma Safari Lodge is located on the edge of a plateau, offering endless views over the seasonal Chobe flood plain. It also bears witness to magnificent sunsets – the ultimate way to celebrate the end of another perfect African day.
Made from local materials and designed to blend into the natural surroundings, Ngoma Safari Lodge is an intimate bolthole located in a private oasis. Perched on the edge of a plateau overlooking the Chobe flood plain, the Lodge’s central guest area is flanked by a collection of suites that offer guests privacy, luxury and panoramic views. 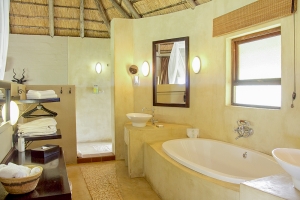 A perfect combination of natural splendour and comfort, each of the 8 luxury suites offers breathtaking views over the Chobe flood plain. Each suite has a private deck with an outdoor shower and a plunge pool in which to cool off and soak up the peace of holidaying in Africa.
Every eco-luxury suite has an en suite bathroom with hot and cold running water , a double basin vanity, an indoor shower, flush toilets and locally sourced bath products 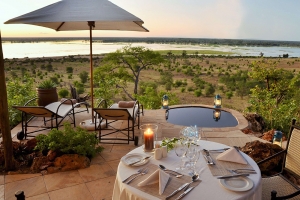 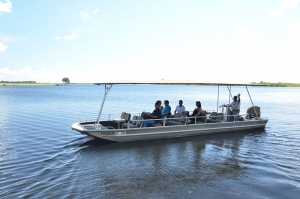 GAME DRIVES:
Our rangers agree – no two drives are ever the same. Each outing is ripe with potential. Sometimes it will be a pack of African wild dogs trotting on the hunt and at others, it may be a lioness drinking at a waterhole with her cubs. It’s nature’s version of the lotto.
• Get into the animal’s environment and see how they live.
• Our highly trained guides and hosts will open your eyes and your mind.
• Uncover the fine balance between animals, their environment and conservation.
• Witness the drama and majesty of predators and prey.

NIGHT SAFARIS:
Night drives are markedly different from daytime game drives. As the heavy sun dips below the African horizon, the world takes on a different scent, sound and shape. Armed only with red filter night light – the game is on to spot predators hunting or eating, or the rare porcupine or aardvark.
In the space of a night, one’s senses become heightened and more focussed. Before long you will learn how to spot unusual shapes, sounds or a strange movement. It could be something small and shy or it could be a large cat on the prowl.
• Specific species can only be seen at night.
• Learn how to track predators under the stars.
• See smaller shy animals such as bush babies and aardvarks.
• Experience the rush of an explosive predator chase and kill.

WALKING SAFARIS:
Nothing heightens the senses like hiking through an area alive with threatening predators. Every sound is amplified, every movement is magnified and the sheer size of large animals is put into perspective when seen up close and on foot. A walking safari is a rich opportunity in which to experience the details of life in the bush – both big and small.
Rekindle your human instincts of how to track and read the signs of the bush. With your guide’s help, you will see your surroundings in a completely different and unforgettable light. Every scent, marking or sound is a clue.
• A wildlife experience at its most intimate.
• Incredible views and photographic opportunities.
• Get up close and personal with nature and wildlife.
• Learn tracking and other skills of surviving in the bush.

BIRDING SAFARIS:
Bird lovers are spoilt for choice when it comes to birdwatching in southern Africa. The region’s wealth of varied habitats – including watering holes, forests, flood plains, mud pans and wetlands – attract a vast range resident and migratory species.
The summer months see the African skies heavy with flocks of returning migratory birds. The waters and open floodplains of the Okavango Delta make it Botswana’s prime birding destination with over 500 recorded species, while Hwange National Park in Zimbabwe boasts good infrastructure and boasts 420 species on file.
From the waders of the Okavango Delta to the raptors in Hwange National Park, bird lovers can see hundreds of different species thanks to stringent protection laws. New to the hobby or a seasoned twitcher, specialist Machaba Safaris guides are on hand to conduct private tours.
• Over 500 species recorded in the Okavango Delta.
• Excellent visibility on vast open floodplains.
• Migrant birds arrive from October to March.
• Hwange National Park is home to the world’s largest flying birds.

CULTURAL EXCHANGE:
The purpose of going on a safari was not limited to seeing animals. It was a journey of discovery; of new lands, new plants, new tribes, foods, languages and traditions. Machaba Safaris embraces this authentic experience by weaving in rich opportunities for cultural engagement with Africa’s local people.
As a Machaba Safaris’ traveller, you have an open invitation to meet the local villagers and witness what life in a remote part of Africa is like. The wealth of generosity and hospitality that every guest receives on arrival is heartwarming.
Machaba Safaris are actively involved in meaningful initiatives that offer support to villagers living in the remote areas in which we operate. And while we are the ones doing the helping, we end up receiving so much more than we could ever have imagined.
• Learn about local culture, heritage and knowledge of the land.
• Be mesmerised by traditional tribal dance performances.
• Discover life in an African village.
• Visit some of Machaba Safari’s social responsibility sites.